Presidents and Americans with Disabilities

In honor of President’s Day, I decided to reflect on some of the Presidents who played a significant role in improving the lives of children and adults with disabilities. Up until the 60s, most families were ashamed to admit that they had a child with a disability. President John F. Kennedy’s sister Rosemary, who had intellectual disabilities, served as an impetus for the President’s push to establish the President’s Panel on Mental Retardation in 1961. 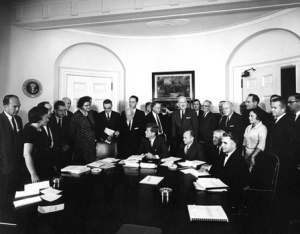 The President’s Panel on Mental Retardation, 1961

Comprised of 27 members, the panel reviewed the country’s current intellectual disabilities programs, eventually presenting the President with over 100 recommendations for the first comprehensive federal approach. Dr. Gertrude Barber, our founder, was a member of this panel.

A year later, President Kennedy signed the Maternal and Child Health and Mental Retardation Planning Amendment, which incorporated many of the panel’s recommendations and provided planning grants to enable states to update their intellectual disabilities programs. A second piece of legislation provided funding for construction of facilities related to treatment and care of people with intellectual disabilities. At the time of its signing, President Kennedy stated: “Mental retardation ranks with mental health as a major health, social, and economic problem in this country. It strikes our most precious asset, our children.” 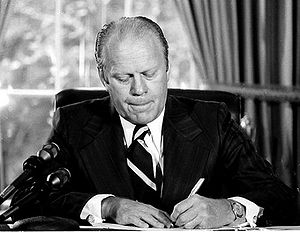 The next major piece of legislation concerning people with intellectual disabilities was President Ford’s 1975 signing of the Education for All Handicapped Children Act, since renamed to the Individuals with Disabilities Education Act (IDEA). This special education legislation established a federal mandate of “free, appropriate public education” for children with disabilities. After the law passed, over one million children who had not been receiving any or very limited educational services were brought into public school systems.

Then on July 26, 1990, President George H.W. Bush signed The Americans with Disabilities Act, the world’s first comprehensive declaration of equality for people with disabilities. “Today’s legislation brings us closer to that day when no Americans will ever again be deprived of their basic guarantees of life, liberty, and the pursuit of happiness,” President Bush said. 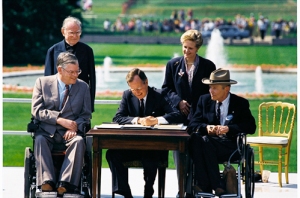 Most recently, Obama made history by signing the ABLE Act, which provides lifetime saving capabilities for people with disabilities.

It’s wonderful that the United States continues to be a leader in supporting the rights of children and adults with disabilities. In only 50 years we’ve gone from sending people with intellectual disabilities “away” to celebrating their unique and valuable contribution to our society. As Americans, we can all be proud of the monumental progress our country has made.

2 Responses to Presidents and Americans with Disabilities