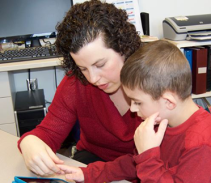 I sat down with Amy Moczulski, M.A., CCC-SLP, speech-language pathologist at the Barber National Institute. Amy’s role in the classroom is to assist students in learning to use augmentative and alternative communication (AAC) devices, and this past year, she began a project with Tobii Dynavox’s Marleah Herman-Umpleby, M.S., CCC-SLP working with adults in our group homes.

Amy told me the idea began at one of our monthly Technology Device Committee meetings, where discussion had shifted from what we were accomplishing in the school to replicating those efforts in the adult division.

“Learners with complex communication needs requiring AAC typically receive the necessary services to meet their language needs while in a school-based setting,” Amy stated, “however, there is a lack of continuity and support when transitioning out of the school systems.”

Three participants were chosen, two in Erie and one in Pittsburgh. Thanks to a grant from Erie Insurance, the group homes already had Microsoft Surface tablets available. Amy’s objective was to determine if communication opportunities could increase by utilizing the Surface tablets and Tobii Dynavox’s software, Snap Core First. 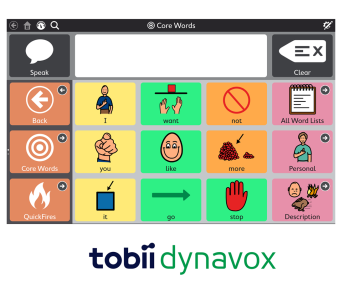 The scope of the project was to provide training and support to group home staff in order to provide the residents with meaningful communication opportunities throughout their daily routines through the use of AAC.

Despite the challenges, there were major successes with two of the participants, Missy and Will.

Missy had a strong intent to communicate with the group home staff and visitors. Using Snap Core First, Missy had a clear understanding of selecting icons on the screen to activate the speech output. Through use of the device, she found topics that interested her and her social interactions with the staff and her housemates increased. Because of this success, Missy now has her own iPad.

Meanwhile, Will made a connection with his housemate on his first night using the device, and continued to connect with visitors while watching sports on television. With continued use, staff reported less behavior issues and an increase in Will’s natural speech and engagement. Will also now has his own personal iPad with the Snap Core First software.

So what are the next steps?

“Expanding AAC across all programs,” said Amy, “not just in their home, but in the day program, work and the community. We would like to continue building independence in teams, expand to other participants, and create a series of videos demonstrating use in the home for residential staff and families.”

Amy Moczulski and Marleah Herman-Umpleby presented the project’s success this past fall at the annual American Speech-Language-Hearing Association (ASHA) convention in Florida.