Posted on September 6, 2012 by all about autism 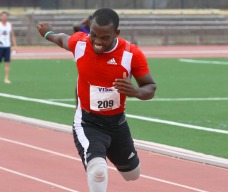 Blake Leeper, runner and member of the 2012 U.S. Paralympic Team, serves as an example of setting the bar high.  Blake was born without lower legs and feet.  The doctor told his parents that he would never walk.  But his parents set Blake on a bold path that would train him not only to overcome obstacles but deny that they had ever existed in the first place.

Blake was fitted for prosthetic legs at 6 months of age and was walking three months later.  Later, he started running.  And he hasn’t stopped running yet.

On Saturday, September 2, in London, Blake received the bronze medal in the Men’s 200 meter sprint.

This entry was posted in Uncategorized and tagged blake leeper, disabilities, paralympics, running, setting the bar high. Bookmark the permalink.