July 26th: A Celebration of Independence

This Friday, we will celebrate a second independence day in July, one less known than the 4th. On July 26th, 1990, President George H.W. Bush signed the historic Americans with Disabilities Act (ADA), a civil rights law that prohibits discrimination against individuals with disabilities in all areas of public life, including jobs, schools, transportation, and all public and private places that are open to the community at large.

The road to the ADA was not an easy one, and those fighting for equal rights met resistance. Unfortunately, too often, irrational fears, harmful stereotypes and biased assumptions surrounded people with disabilities, blocking them from the equality that many of us take for granted today.

While many civil rights movements were happening in the 1950s and 1960s, the first major legislative effort on behalf of individuals with disabilities didn’t occur until 1973. The signing of the Rehabilitation Act prohibited discrimination on the basis of either physical or mental disability in programs conducted or funded by federal agencies. A good first step, but it still wasn’t enough.

Two years later, the Education for All Handicapped Children Act was passed, mandating the full inclusion of children with disabilities in public schools. This legislation was later renamed in 1990 the Individuals with Disabilities Education Act (IDEA).

Seventeen years after the Rehabilitation Act, the ADA was signed in 1990. The US government now identified the full inclusion and integration of people with disabilities in all levels of society. Perhaps the greatest impact was in the area of employment. Employers were now required to give all qualified individuals equal opportunity in the workforce, regardless of disability. 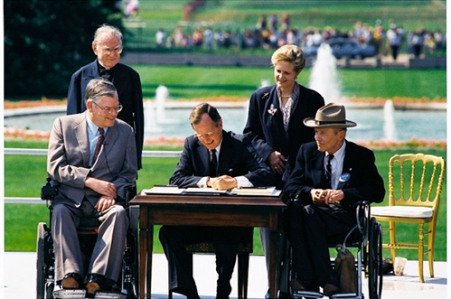 Most people aren’t aware that the Erie region was a force in securing these reforms. Dr. Gertrude Barber, as a member of President Kennedy’s commission on Mental Retardation, was involved in crafting legislation for the inclusion of persons with disabilities. In recognition of her efforts, she was invited to the White House by President George Bush to see this landmark legislation signed into law.

Yes, much has changed for children and adults with disabilities since the 50’s, but the importance and need for advocacy be it in education, employment or community life can never be forgotten.