How are PA’s Kids Faring?

The Annie E. Casey recently published its 2017 Kids Count Data Book, an annual review of how America’s children and families are faring across the United States. The study uses four indicators, economic wellbeing, education, health, and family/community, to measure the status of a child’s overall wellbeing. The results are a state-by-state report and ranking.

I, of course, was mostly interested in Pennsylvania and our ranking. Overall, we rank better than the nation in the metrics of economic wellbeing, including children who live in poverty, children who live in a household with a high housing cost burden, and number of teens who are not in school nor are working. We are also at or below the national averages that measure health; which includes the number of children without health insurance and child/teen deaths.

Although we remain below the national averages for both education and family/community, our rank has declined (albeit slightly). All in all, Pennsylvania is ranked as 18th out of 50 states. 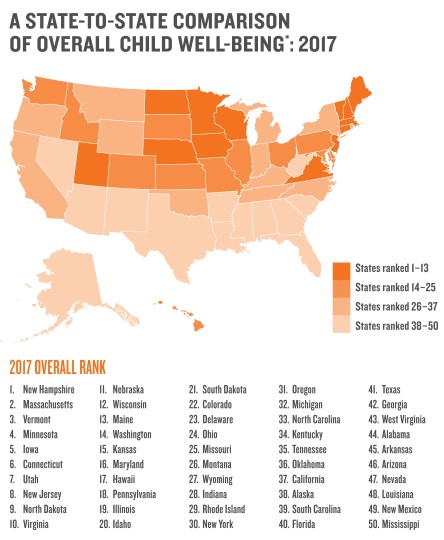 Obviously there are distinct regional patterns that emerge from the state rankings. Northeastern states compose half of the top ten, while states in the south east, south west, and Appalachian have the bottom rankings. Perhaps one of the most important correlations in mapping this out is that these low ranking areas are also where states have the lowest household income.

Intrigued by these statistics, I dug around for some numbers for Erie. I was shocked by my findings, to say the least. According to the most recent statistics available, the city of Erie’s poverty rate for children was 38.2% – for children younger than 5, a staggering 46.7% live in poverty.

The Casey foundation suggests a strong push towards eradicating child poverty, stating: While all indicators are important, the child poverty rate demands immediate action given the role that economic hardship plays in nearly every other indicator.”

Certainly, Erie’s numbers reflect the need to make this a priority as well. With the mayoral race this November, I plan on contacting the candidates to urge them to speak out about their plans to eliminate poverty in our community. Regardless of where you live, this is a serious issue that demands national attention. In past blogs, I’ve talked about how by investing in our children today we are investing in our country’s future – lower poverty rates are directly linked to decreased health and criminal justice expenditures and increased economic output. Working together, we can change the outlook for America’s children.